Built in the 16th century by Juan and Pedro de la Torre. The main altarpiece dates from the 17th century and contains a Gothic sculpture of the Virgin and Child, of the 13th century.

Many illustrious people were buried here under the Catholic Monarchs and later. There are recumbent and praying statues of different styles and times, with carved-in texts in Gothic characters indicating the name, titles and privileges of the buried. 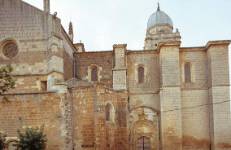