A route that stands out for the cultural richness of its route, with 406 Cultural Interest Assets !, linking historical roads such as the Teresian Route through the province of Ávila, with livestock routes such as the Cañada Real Soriana Occidental, which connects the province of Soria with that of Badajoz.

Its layout connects the capitals of the five provinces through which it passes. 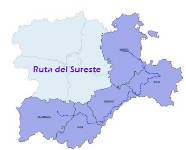