Known as ‘San Jerónimo’, it was founded in the 12th century by Premostratense monks with the help of Alfonso VII de Castilla in 1154.In its beginning it was for monks and nuns as according to the Premostratense custom, the two separated by a thick wall. In 1164 its statute was changed to only allow males.

The church in the monastery was a whim of the House of Alba and was finished in 1482 by order of the second Count and first Duke of Alba, Don García Álvarez de Toledo. Contains Gothic, Isabelline, Renaissance and Baroque elements.

Destroyed during the War of Independence and abandoned after the Desamortizacion (state appropriation of church lands), what remains is the ruins of the Gothic-Isabelline style church, the remains of a 16th century cloister and the 17th century cloister. Amongst the ruins of the monastery there are capitals with ornamental pieces and musicians and figures of Burgundy influence, some of which are on show in the cloister. 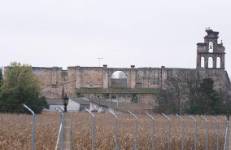