Construction of the Viana do Castelo Main Church dates back to the first half of the 15th century, influenced by Gothic aesthetics. The region, situated between the Minho and Lima rivers, has always enjoyed a certain autonomy, with its religious headquarters in Tuy (from 569 to 1362), Valença (from 1382 to 1444) and Ceuta (from 1444 to 1514), successively. Nevertheless, it was only in November 1977, that Pope Paul VI authorised the creation of the diocese of Viana do Castelo, thus elevating the Main Church to Cathedral.

The church was initially dedicated to the Divine Saviour and only later consecrated to Marian Devotion, having Saint Mary Major as its Patron Saint.

It was ready for worship in 1455 and, in 1483 it was promoted to collegiate by the initiative of the Bishop of Ceuta, D. Justo Balduíno. Its exterior preserves the appearance of a fortified church, of Romanesque inspiration, and similar to some temples of Galicia: on the facade, two imposing towers frame a central body in which a lacy-framed rosette stands out on an ogival portal composed of four archivolts, three of which are decorated. Christ reigning crowns the composition at the end of the last archivolt, flanked by a scene of the heavenly court. Protecting the Cathedral’s entrance are sculptures of the six Apostles, most linked to the traditions of the village and the region: Saint Peter, Saint Paul, Saint John, Saint Bartholomew, Saint James, and Saint Andrew. The sculptural ensemble in the main portal is a remarkable and rare work of the national Gothic style.

Inside, made up of three naves, remarkable features include the exquisite ornamentation and set of armoured graves of local nobility. Among the various chapels, special mention must go to that of the Lord Jesus of the Mariners, belonging to the Confraternity of the Mariners, which preserves a remarkable artistic collection, including an image of the Dead Lord acquired in England in 1593; 17th century liturgical vestments from Milan, and a tombstone dating from 1404, decorated with astronomical symbols, possibly originating from an earlier chapel erected by the men of the sea.

Two violent fires, in 1656 and 1809, caused serious destruction, and the latter led to the abandonment of the church for some decades, having resumed its parochial functions only in 1835. The original cover of the naves was then replaced by painted plaster. The sacristy has rich baroque ornamentation. 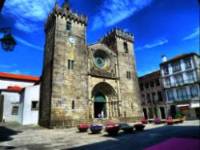