In Astur times, the village grew and takes up La Corona hill.

The first occupation of the settlement occurs between the 7th and 5th centuries B.C. A small 2.5 hectare village occupies the Pesadero plain, protected by natural elements and by a stone and adobe wall. Inside are alleys with irregular layout with cabins built with adobe and mud walls. They have a circular plan and conical thatched roofs. Inside appears a continuous bench attached to the wall and a hearth in the center.

Other constructions were small altars, arranged next to the houses, for offerings and cults. The economy of its inhabitants was based on cereal agriculture and a livestock with cows, sheep, horses and pigs. The diet was completed with hunting and fishing.

From S.IV BC, the town grows reaching the Cerro de La Corona. Rectangular-plan houses were built and distributed on perpendicular streets and patios. Specialized neighborhoods for crafts and metallurgy activities arise, in addition to areas dedicated to landfills and its inhabitants begin to use the lathe for the manufacture of ceramic vessels. The town was abandoned between the middle of the 2nd and 1st century BC, probably due to the pressure exerted by Rome during the conquest and Romanization of the territory.

In the 1st century there was a new occupation on the plain of El Pesadero, it is a pottery installation made up of six buildings around a central paved courtyard. In the workshop, construction materials were produced and stored: bricks, tiles.

In the year 148 A.D. This enclave was definitively abandoned, the deposit gradually progressing to the present day. 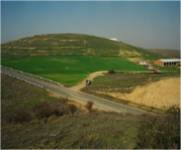 High resolution image. This link will open using lightbox, there may be a context switch
Manganeses Polvorosa Excavación 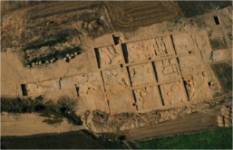 High resolution image. This link will open using lightbox, there may be a context switch
Manganeses Polvorosa Horno 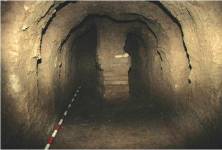 Archaeological Hall of the Corona and El Pesadero

The archaeological classroom of the La Corona / El Pesadero site has a main room of 112 m2 and an annex area, completely fenced, of 150 m2.

It is distributed in two main areas; In the interior room, after[...]