It reached the boom during the century I AC when it joined the Roman Empire.

Apparently, the site where the city is located was occupied by a small population center in the Bronze Age, and in Pre-Roman times it was a town of the Astures, with adobe buildings, palisades, ovens... where potteries and coins of the Iberian culture were also found.

Throughout the I century AC, the town joined the Roman Empire and reached a period of growth as the public constructions, the sewer network and the urban that followed the reticular plant shows. At the end of IV century or at the first of V AC, the city seems to be definitely abandoned.

The public buildings found, as the Thermal Baths and the Market stands out. 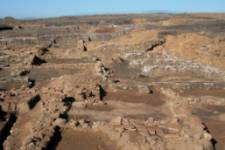 High resolution image. This link will open using lightbox, there may be a context switch
Yacimiento Arqueológico de Lancia 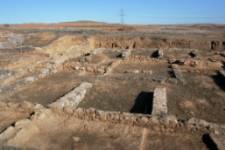