Tiermes was not subdued until the year 98 BC.

During the long Celtiberian War, Rome sent in vain during years its powerful army against a poor people and far away from of the rich lands of Hispania: the Arevaci, whose main towns were Numancia and Tiermes. The last one was not subdued until the year 98 BC, when the consul Tito Didio, after his victory, forced the people to go down of the town to the plain, leaving the acropolis that crowned the hill and impeding its inhabitants to fortify the new place.

Among the remains recovered in the archaeological excavations, the ones from the celtiberian and Roman times give more information. It stands out the rooms and dwellings dug into the rock, the Celtiberian necropolis of Carratiermes, complex public buildings, such as the so-called 'Castelum Aquae', the baths... besides of streets or defensive doors, such as the late Roman wall surrounding the hill. The set is finished with a hermitage from Romanesque period in which the rich and varied decoration of the capitals and corbels stands out. 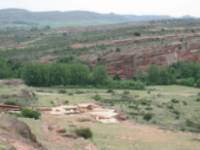 High resolution image. This link will open using lightbox, there may be a context switch
Yacimiento arqueológico de Tiermes 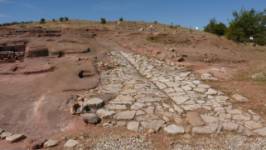