Place of settlement of the Roman legions.

It is a military Roman camp whose remains are dispersed in the urban area of Herrera de Pisuerga. It became an important communication hub in the plateau for going out towards the Cantabrian ports and the transport of slaves and cereals too.

It was an important strategic settlement in the Roman Empire expansion to the North of the ancient Hispania. 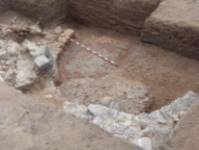 Didactic hall recreating the Roman world, the life in a Roman legion's camp, a ceramics workshop, a coin and bronze workshop... Created with the idea of building awareness of the remains of the Roman camp[...]