It was a medieval defensive site.

In San Cebrián de Castro are the ruins of the ancient city of Castrotorafe, currently an uninhabited area, popularly called ‘Zamora la Vieja’, a site located as early as the 12th century. It was a defensive medieval settlement, which emerged on the banks of the River Esla.

For some researchers here he settled an ancient Roman town, the Vico Aquario mansion, mentioned in Antonino Pío's itinerary. It was to this town of Castrotorafe that in 1129 Alfonso VII and his wife, Berenguela, granted jurisdiction and delimited their alfoz, thus having evidence of a fortified town. The construction of the first wall surrounding the town must date from this time. The importance of the place was evident, as a consequence of its geopolitical situation, since it controlled the passage of the Esla river, being a passage between Castilla and Galicia.

In 1176 the Order of Santiago received Castrotorafe as a royal donation. During those years Castrotorafe had to be formed as a town and its fence encompassed an area of 10 Ha; but there are no recognizable vestiges of a castle from this period. Then the villa goes through various hands.

The castle should have been built by the Infante Don Juan before 1319, with a double square wall, of which the south front is preserved, with three towers, and the beginning of the east front with the main gate. The corner tower was possibly the keep, and only one wall remains where the entrance door opens. Soon after, the Castrotorafe encomienda returned to the Order of Santiago. Castrotorafe suddenly regained strategic prominence during Enrique IV's War of Succession, which pitted future Catholic Monarchs against Princess Juana and her husband, Alfonso V, King of Portugal.

In the 15th century the works to reinforce the castle begin, adapting the old fortress of the XIV to the use of artillery. Until the middle of the 16th century, the castle must have been in relatively good condition and, even in the early 17th century, repairs continued to be made. But then it was abandoned and ruined.

Today it preserves remains of the canvases on the wall, built in slate masonry and mortar, which occupied an area of 4,709 square meters, including the castle, the hermitage and the walls.

The best preserved is the castle, with two enclosures shaped like an irregular trapezoid. The interior of this one, is practically ruined, built with different materials and with a plant similar to the exterior. Only a masonry wall remains from the parish church that serves to indicate the location of the temple within the walled area.

The monument is open to visitors, and is currently one of the most precious places in the province of Zamora for both lovers of archeology and photography. 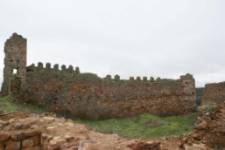 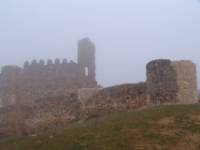 High resolution image. This link will open using lightbox, there may be a context switch
San Cebrián Castro Castrotorafe Aérea 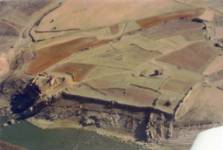