It is an opened cavity in the rocky headland cut by the Duraton River.

The archaeological site of the cave of the seven altars is located in the locality of Villaseca, 100 meters far, upstream, of the bridge over the Duraton River. It keeps cave paintings and it was the sanctuary of a Visigoth hermitage. One of their hermits was San Frutos, the patron of the diocese, on whose tomb there was a Benedictine priory of which remains the church on the summit.

It is an open cavity in the rocky headlands cut by the Duraton River. Its remains are located in two different environments, one in the entrance hall in which a horseshoe arch was carved with similar shape to the three ones that define the inside environment of the cave itself. There are elements known as altars which are traditionally related to the cult in Visigoth times. 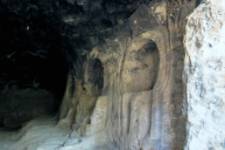