Roman settlement of the Center and North of Hispania.

It is an ancient Arevaci settlement, where the general Sertorius became strong in front of Pompey in the year 75 BC. The city had a thriving life until the last quarter of the III century AC, keeping its activity until the V century AC.

In the site is the greater theatre of its time with a large proportion of the stands carved in rock and an important exhibition of mosaics, which represent the taste and the culture from the II to the IV century AC mainly. There were two thermal buildings that were built in the I century AC that are called Los Arcos I and Los Arcos II which exceed the 7000 square meters. 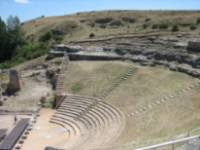 High resolution image. This link will open using lightbox, there may be a context switch
Clunia 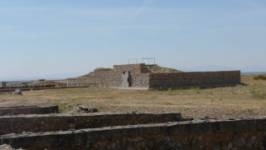