The Sierra de la Culebra is the only place in the province of Zamora where we find samples of Schematic.

Art. La Covacha del Portillón is a small quartzite cave. It was discovered in 1977 by Grande del Brío. Located very close to the Pico de Peña Mira, the highest in the Sierra de la Culebra.

Within this cave there are various schematic motifs such as anthropomorphic, anchor-shaped, cruciform, bars, canes, etc., all made in reddish and orange colors.

This cave is elongated and higher in the center than on the sides. The paintings are located on the interior western wall and painted elements such as dots and bars have been seen. Chronologically it is difficult to indicate a specific date of its origin, although apparently its dating is within the Chalcolithic or the Bronze Age.

In this cave there are clear signs of deterioration, produced by the numerous bonfires that have been produced inside, and whose ash remains cover practically all of its walls. It seems to have been used to capture some schematic motif, or at least to have been used as a temporary refuge by the artists who made the Canchal de Melendro paintings. 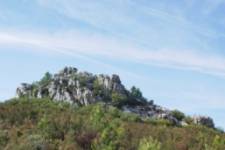 High resolution image. This link will open using lightbox, there may be a context switch
Linarejos Covacha Portillón Figura 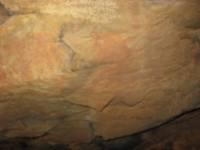