It is a prominent set of dolmens with great historical importance.

Dolmens are places of collective burial and were already looted in Roman times. This dolmenic complex has great historical importance and is made up of El Casetón de los Moros (Arrabalde), El Tesoro (Morales del Rey), San Adrián and las Peñezuelas (Granucillo), the latter declared a Site of Cultural Interest, and all of them form part of the Route through the Valleys of Zamora, Vidriales, Órbigo and Eria.

The construction of large monumental tombs that characterize Megalithism is located at an advanced time in the Neolithic period, remaining as funerary reference points long after this period ended –Ages of Copper and Bronze–. In these funerary structures, the burial of individuals from the same group was carried out, accompanied by a trousseau made up of elements of carved stone, worked bone and sometimes ceramics. The chronology of these megaliths would be between the end of the 4th millennium and the beginning of the 3rd millennium B.C.

The dolmens of San Adrián and Las Peñezuelas were excavated in the 1930s and re-excavated in 1984. In both, items of funeral trousseau were found.

The Las Peñezuelas dolmen conserved four slabs in situ and two falls on the ground. In the 1984 excavation, the bases of two other orthostats and three foundation pits of as many stone blocks were located, as well as three small circular holes that delimited and closed the chamber. The restoration consisted of replacing the two inclined orthostats that were originally preserved on the same site, reinstalling the other three original pieces and placing two stones as a corridor.

The San Adrián dolmen conserved eight slabs and three foundation pits. The performance consisted of relocating the orthostats to their original positions and the gaps were covered with new pieces, until completing the perimeter of a circular chamber. The megalithic structure was almost entirely covered by a circular mound of earth and stones, reinforced at its base by a perimeter ring of stones. This monument has traditionally been interpreted as a megalithic cyst, which determined that access to the interior of the chamber was proposed by placing a smaller orthostat on the southeast flank, allowing passage through the burial mound.

Currently, they are rehabilitated and have been conditioned, with explanatory signage, for tourist visits. It has a complete recreation of a typical dolmen of the area in which its original appearance and the parts that compose it can be observed volumetrically: sepulchral chamber, corridor or corridor and burial mound. 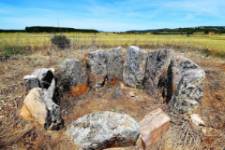 High resolution image. This link will open using lightbox, there may be a context switch
Granucillo Dolmén Peñezuelas 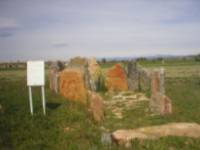 High resolution image. This link will open using lightbox, there may be a context switch
Granucillo Dolmén San Adrián Emplazamiento 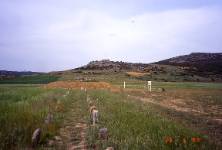 Remarks: There are available guided tours offered by Serviocio siglo XXI, S.L. if booked 2 days in advance by calling 987 22 31 02 and 609 26 11 46. A guide accompanies you throughout the centre, providing all the information required. In any case, if there is any small group who wants to visit this center out of the schedule, we will be happy to receive them, if booked in advance.

Created to introduce the visitor into the atmosphere of the Neolithic times and its main manifestations. It has a reproduction of houses and typical goods from a village (crockery, weapons, tools), showing[...]