The pre-Roman Castro of La Mesa de Miranda was discovered at the beginning of the 20th century. In it, various archaeological interventions have been carried out that have allowed us to know its necropolis, with the excavation of 2,230 tombs, its defensive system and strategy and some aspects of its urban organization.

It is 2 km. from the historic center of Chamartín, along a path that can be accessed by vehicles, although it is advisable to do so by walking through a landscape of centuries-old holm oaks. It has been declared an Asset of Cultural Interest, with the category of Archaeological Zone.

It was inhabited by the pre-Roman Vetón people between the V-IV and II-I centuries BC, ending its occupation as a consequence of the Romanization of the lands of the peninsular interior. It consists of three fortified enclosures annexed to each other in an area of 30 ha and a necropolis close to the enclosures.

It is conditioned for public visits. Its most notable characteristics are to observe the strategic position between two water courses, the laborious fortification that it has, illustrative of a troubled time, the importance of the cult of the dead that is seen in the necropolis and the characteristic landscape of holm oaks in the very edge of the plain of the Douro Valley that the visitor should not stop enjoying. In Chamartín you can see one of the characteristic stone bulls, typical of the Vetón people. 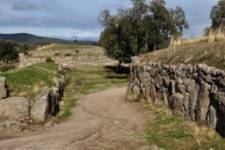 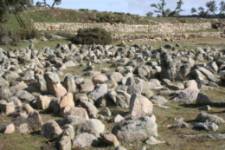 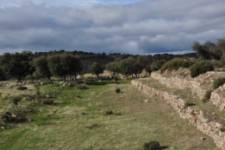 High resolution image. This link will open using lightbox, there may be a context switch
Mesa de la Miranda - Murallas 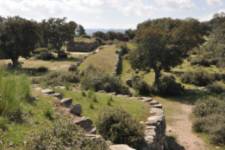 High resolution image. This link will open using lightbox, there may be a context switch
Mesa de la Miranda - Necrópolis 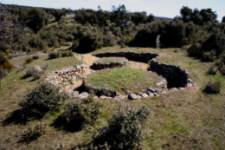 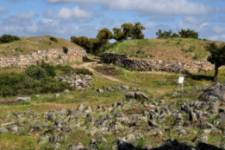 The life in the village through a mobile mockup, and a computer program which allows us to choose a fiction character to know its daily tasks, are shown in the first floor.