It is a relevant example of the castreño settlement, of four hectares, from the Iron Age characteristic of this area, with a privileged natural situation that makes it practically impregnable, located on the escarpment over the Fontano stream and next to the trough north. This fort presents a construction of a complex defensive system based on a wall, a field of sunken stones and two moats.

The fortified wall that surrounds the upper part of the hill is raised by slate slabs arranged in a blight and on the outside, there is a field of driven stones that is exceptional, since it extends throughout the entire perimeter of the enclosure, except in the area this, where it becomes an inaccessible area, due to the existence of a natural cut on the stream. This defensive element is made up of hundreds of pointed prismatic stone blocks placed randomly close together and which, buried in the ground substrate, protrude about 30 centimeters from the surface. This field of kneeling stones made any surprise attack on the fort unfeasible. In addition to this unusual extension, its location between two pronounced ditches that are 10 meters apart from each other is original, which accentuates its impregnability.

Within the site area, two ceramic fragments have been recovered by hand with medium-sized quartz and mica degreasers. 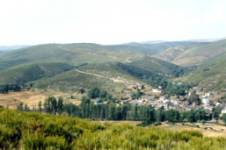 High resolution image. This link will open using lightbox, there may be a context switch
Riomanzanas El Castro Perfil 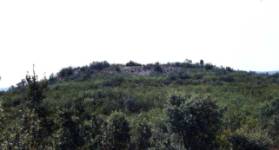