It is a luxury villa of considerable extension known as 'la Cañadilla'.

It is a Roman villa which keeps the remains of a luxurious manor house of the IV century, and was inhabited until the V century, in which you can visit its two courtyards surrounded by a total of 30 rooms.

The route for this Roman villa shows the distribution of the house, as well as the characteristic floor of mosaics, among which stands out one which represents Pegasus, together to a fountain of which flows a stream where two nymphs are bathing him. Besides, there are baths to which you get into through a corridor finishing in a big room of tri lobed plant. 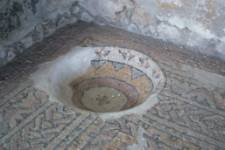 High resolution image. This link will open using lightbox, there may be a context switch
Villa romana de Almenara - Puras 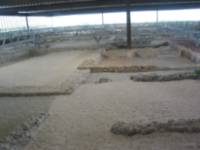