It was this strength in their time, architecturally speaking, the most important of Castile

Castle of the Sarmiento

Its Keep had no rival in breadth and length and probably also in height. Was, in his time with three-story vaulted to what I had to add the finish of the parapet and battlements.With all this, its height had to be considerably higher than today.

The thickness of the walls is the largest in Spain of all the castles of the fifteenth century, in some places 11 meters thick.The original tower of the castle was smaller and may be attributed to the same person who erected the towers of Fuensaldaña, Peñafiel and Torrelobatón. It was built by the Sarmiento family to replace a former 10th-century fortress and its name and origin are linked to the Count of Monzón, Don Pedro Ansúrez, the founder of the city of Valladolid. 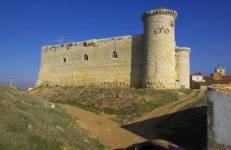 High resolution image. This link will open using lightbox, there may be a context switch
Castillo de Los Sarmiento 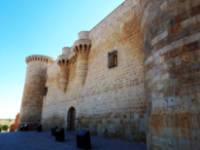 Remarks: Groups of more than 10 people book in advance. In winter it opens on Tuesday afternoons. CHRISTMAS: Closed on December 24,25,31. and January 1 and 6. From January 11 closed until February 28