In the town of Santibañez de Vidriales, in Zamora, next to the City Hall, an Interpretation Centre of the Roman Camps has been set up. It provides information on the military organization of the Roman military camps by paying special attention to the Petavonium.

They have recreated various military installations in order that we can get an idea of the lifestyle of settled military units in the Roman fort. The military enclosure Petavonium had an extension of 17 Ha, with the presence of five thousand legionaries of Legio X Gemina. 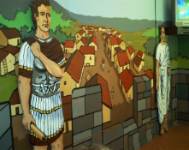