The battle of Atapuerca

The festival is the recreation of a historical event currently taking place on the hillside of the church of San Martín, Atapuerca municipality, near the Camino de Santiago, in a free outdoor show.

The development of the feast is a staging of a historical event, which took place on September 1, 1054, the Battle of Atapuerca, between the kings and brothers, Fernando I, King of León and Count of Castilla, and García III, King of Navarra. Atapuerca was in the territorial limits of the kingdoms of Navarra and León.

The outcome of the battle, with the victory of Fernando I and in which King García III died, was the first foundation for the birth of the kingdom of Castilla. 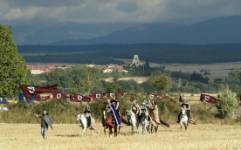 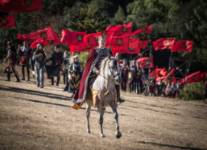 High resolution image. This link will open using lightbox, there may be a context switch
Momento de la batalla 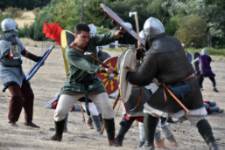