A lively town with a well-preserved history

The Villa of Molinaseca is located in the eastern part of the Bierzo region, to the west of the León province, in a landscape of great beauty. It is configured as a relevant group, whose formation, development and appearance is closely related to the Camino de Santiago, which determines its peculiar urban structure of a linear nature.

This Villa, declared a Site of Cultural Interest with the category of Historic Site, is one of the most important enclaves of the Jacobean Route. Its streets with a medieval flavor invite you to stop to explore its history. During the Middle Ages it belonged to the lordship of Ramiro Froilaz, nephew of the Cid Campeador. Later, the lordship of Molinaseca was divided between the Abdesa de Carrizo, the abbot of the Sandoval Monastery and the Bishop of Astorga.

The pilgrim footprint can be seen in its monumental Calle Real, which starts from the medieval bridge over the Meruelo river, and ends at the "Old Cross" made of stone. It is the main artery of the Villa, in it we find palaces and emblazoned houses, as well as some examples of popular architecture. Other symbols of the town are the sanctuary of Nuestra Señora de las Angustias (17th century), where the Virgen de las Angustias, patron saint of Molinaseca, is found; the parish church of San Nicolás de Bari (18th century) and the hermitage of San Roque, today transformed into a pilgrims' hostel.

Molinaseca represents a stop along the Camino de Santiago and one of the most important enclaves of the Ruta Jacobea. Its medieval streets invite visitors to make a stop and learn more about its history. Located below the Monte Irago, past Foncebadón, this town, declared an Artistic and Historic Site in 1975, boasts a rich past and a lively present.

The town of Molinaseca, an obligatory stop for pilgrims on their way to Santiago de Compostela and visitors of the region, is a lively town with a well-preserved history. During the Middle Ages this town was part of the manor of Ramiro Froilaz, the nephew of El Cid Campeador. The manor was subsequently handed over to the abbess of Carrizo and the abbot of the Monasterio de Sandoval and the bishop of Astorga.

The mark of the pilgrims can be seen in the very entrance of the town, where the Iglesia de Nuestra Señora de las Angustias stands, just next to a patch of fertile orchards worked by the neighbours of Molinaseca.

High resolution image. This link will open using lightbox, there may be a context switch
Molinaseca-Plaza Garcia Rey 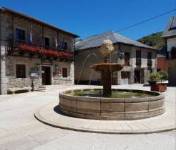 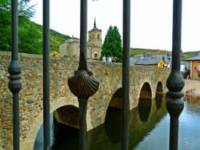 High resolution image. This link will open using lightbox, there may be a context switch
Molinaseca. Iglesia Parroquial

High resolution image. This link will open using lightbox, there may be a context switch
Molinaseca