Romanesque-Gothic church. Its construction was carried out from the last third of the 12th century (around 1170), during the reign of Fernando II de León, until well into the 13th. It has three naves and a transept topped by a dome, and its northern portal is one of the most notable contributions of Romanesque architecture from the 12th and 13th centuries.

Two epochs can be distinguished: a first master using light limestone, creating an evolved Romanesque style, and the second master, who finishes the construction and covers the temple, which uses reddish sandstone and less evolved Romanesque architectural elements. The covers are significant.

The north portal of the Collegiate Church of Toro shows us the Christ in Majesty together with the Virgin, Saint John and the 24 elders of the Apocalypse, in a representation of the Last Judgment. The south cover is simpler. But among all, the COVERAGE OF MAJESTY stands out, one of the most famous covers of Spanish Gothic architecture. it was carved and polychrome in the last quarter of the 13th century. Very interesting is the rich display of musical instruments played by the Elders of the Apocalypse around a manifestation of the divinity of Christ, the Virgin and John.

The Collegiate Museum, located in the sacristy, preserves important works of art, such as an Italian school ivory and tortoiseshell or an alabaster relief representing the adoration of the Magi. As for painting, the excellent Flemish panel of the Virgin of the Fly, from the circle of Jan Gossaert, stands out. 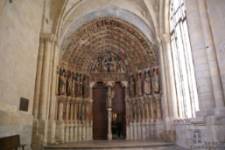 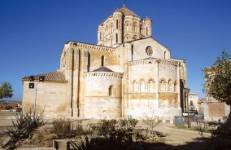