The silence of a beautiful place.

One of the emblematic, religious and beautiful places that the city of Zamora contains. The Corpus Christi Convent, also called the Transit, was founded in the 16th century by the order of the Poor Clares Barefoot.

It is a cloistered convent. Renaissance-style complex, with a cloister around which the convent's premises are organized. It has a rectangular floor plan, two stories high with bright windows and built in brick. It has Doric columns at the bottom and Ionic columns at the top. In its church is the Virgen del Tránsito, it is one of the best known and most revered in the diocese. It represents the moment of the Assumption, the ascent of Mary to Heaven. She is depicted asleep with her hands resting on her lap, as if she were sleeping peacefully at the moment when God decides to ascend to heaven both her soul and her body.

Before or after the 9 o'clock mass you can visit this image, a beautiful space, solemn and in good condition. A building that transmits the history of those who lived and lived devoted to their faith. 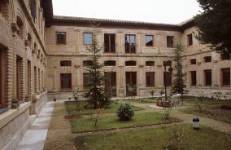