The convent of the desert is in the entrance to the valley, built as a place for those looking for the quiet life of a recluse at the end of the 15th century, amongst numerous hermitages located inside and outside the convent grounds.

The Carmelite monastery is simple and austere. The grounds have two walls, inside which is the convent and outbuildings. The church, built in 1602 and enlarged in 1686, is the main building and is surrounded by a cobblestone road and extensive gardens acting as a Cloister.

In the south there are several oratory cells belonging to the monks. In the western wall there is a doorway leading to the refectory, kitchen, workshops, servants quarters, bakery, washroom...

The definite structure of the monastery was built during the 17th and 18th centuries.The monks left Las Batuecas in 1836 due to the desmortizacion (state appropriation of church lands) and it went into private hands. Since 1950 it has been occupied by the Carmelite nuns who have re-established a hermit lifestyle there. 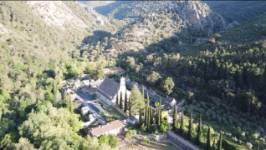 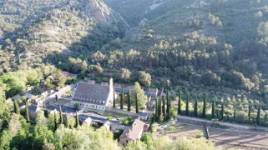