The French King Louis the Younger gave Sancha of Castile a thorn from the crown of Jesus.

The monastery was built in the 12th century on the orders of Sancha of Castile, sister of Alphonse VII the Emperor. The French King Louis the Younger gave the Spanish princess a thorn from the crown of Jesus kept in the Monastery of San Dionís, hence its name.

The church façade and the two towers date back to the mid-17th century and are attributed to the School of Ventura Rodríguez. Inside, the two cloisters are particularly worthy of note, as are the 17th century quarters for the monks and their guests, a series of chapels and the reliquary, which holds the monstrance that safeguards the thorn.

In 1731 the building suffered a fire, and much of the monastery and library were destroyed, although fortunately, the Holy Thorn reliquary and Book of Tumbo were saved. Later came the French invasion and the Ecclesiastical Confiscations of Mendizábal, which in 1835 finally forced the remaining monks to leave. 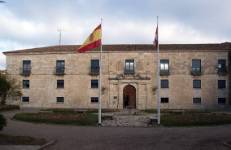