It was built on land donated in 1142 by Alfonso VII to Count Pedro Ponce de Minerva and his wife Estefanía Ramírez.

After receiving numerous donations and possessing extensive territories, it entered decadence in the fifteenth century. In 1592 and 1615 it was grass of the flames, reason for which it had to be rebuilt. The permanence of the monks remained until 1835, date in which the exclaustrado with the confiscation of Mendizábal took place.

Its architectural layout responds to that indicated by the Cistercian Rule. It has two great cloisters, although the one that is conserved is realized in century XVII, in him it maintains the severity of the Chapter Room.

The church is of plant of Latin cross, with three ships, cruiser and semicircular apses.

The primitive gateway by the north gable, is Romanesque, and presents a unique resolution of its archivolts.

The west, which is now the entrance, is a pointed arch, standing out its beauty by the simplicity of its construction and decorative elements based on floral elements, figures of monks and the calvary of the tympanum of the door. In the south gable rises the belfry that is of later times.

In its interior they emphasize the sarcophagi of the founders, arranged to both sides of the altar, in the middle mounted the major altarpiece in which participated between 1605 and 1618 Pedro Sánchez, Cistercian monk 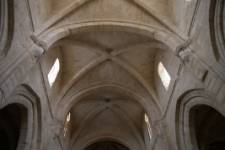 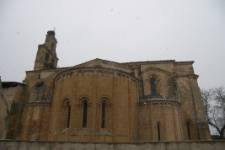