El Paso honorable bridge, located in the town of Hospital de Orbigo in Leon, is one of the longest bridges of The Way of Saint James that crosses the Orbigo River. It has 20 arch shaped spans of different types, with lightening small arches in one of the central sections.

It is believed that the Romans built here a bridge that was part of the Via Aquitania that connected Asturica (Astorga) with Tarraco (Tarragona) and served to transport the gold from Las Medulas through Hispania. It was in the Middle Ages (XIII century), when was constructed the current bridge and was rebuilt several times. They say that in January 1434 M. Suero de Quiñones requested a permission to the King Juan II to hold a tournament. In love with Ms. Leonor de Tovar, M. Suero agonized his love fasting and holding on his neck a heavy ring every Thursday. To win the admiration of the lady challenged all the knights who dared to come and fight on the bridge Orbigo, promising to prune up to 300 lances. The tournament was held in July lasting 30 days and 166 spears were pruned. A year later M. Suero married Ms. Leonor and 24 years later one of the knights defeated in the joust will end the life of M. Suero. 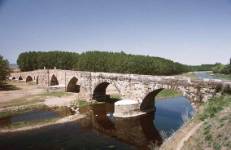