A magnificent medieval work next to the wall.

Roman bridge over the Adaja River

The Roman city of Avila needed a bridge to cross the river Adaja. A beautiful bridge that is located near the walled enclosure, in the South of the city, a bridge able to communicate the 'decumanus' door of the West with the opposite bank of the river.

A bridge with arches supported on four pillars, and which were cut during the Arab invasion, which forced the reconstruction in the Middle Ages, already with other techniques and different materials. The great arch and cutwater were totally redone, being somewhat smaller. This medieval work, of less care than the Roman, differs clearly from the previous. It maintains a sandy ground, with parapets at the sides of variable height. It is a bridge that still represents a rich architectonical work for this city and those who visit it. 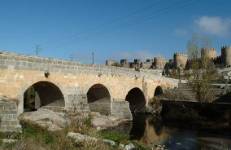 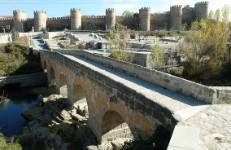