In 1667, so as to cover the expenses of the work carried out on the Vestry of the Virgen del Castañar, patron of the city, the first bullfight took place in an improvised wooden arena. In 1707, to celebrate the birth of the Principe de Asturias, Luis I, the second bullfight took place in a wooden structure and then it was replaced by the bullring which still exists today, built between 1711 and 1714, the oldest bullring in Spain.

This plaza is an enclosed structure containing an arena 41 metres in diameter, with capacity for 4200 people, that conserves the same general characteristics, bullpens and buildings that the Duke Don Juan Manuel II ordered.The three-storey building that contains the presidential enclosure, entrance gates, first aid centre and balconies is from the second half of the 19th century. 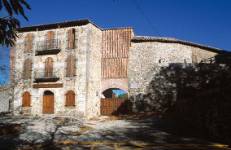 High resolution image. This link will open using lightbox, there may be a context switch
Plaza de toros El Castañar 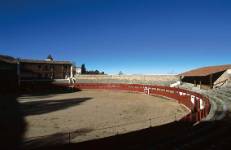