Higher School of the University of Salamanca

The building began in 1411 when Benedict XIII ordered its construction. The facade, from 1529, shows in the central street on the lower floor, a medallion with half-length images of the Catholic Monarchs who hold the royal scepter between them. The rest of the surface of this first body is decorated by grotesques that cover, as in the rest of the façade, even the pilasters and moldings that organize the complex.

The second floor is adorned with the coat of arms of Charles V flanked by two others with a double-headed eagle and a crowned eagle, which symbolize the Empire and the Kingdom of Spain.

The third floor is the most allegorical; In a central position, a sculptural scene represents a Pope conversing with cardinals and on both sides the figures of Venus and Hercules between symbolic medallions.

We can see that the relief on the façade is increasing from the bottom up, from the low relief on the first floor, through the middle relief on the second, to the high relief on the upper floor. This is because the facade was conceived to be seen from quite close, since at the time of construction there was no Patio de Escuelas, but a narrow street. 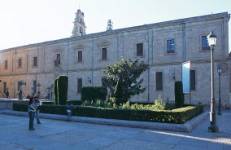