Lower School of the University of Salamanca

On the access cover an impost gives way to a central body formed by three rectangles separated by pilasters decorated with various animals, the cost of arms of Charles V on the central panel and two tow-headed eagles on the sides. In the upper part is the Papal tiara between two medallions of showing San Pedro and San Pablo.

In the courtyard the arches are alternatively straight and curved and the whole is crowned with an 18th-century Baroque balustrade. To the right of the courtyard is a statue of a so-called prelate, covered by a large coffered ceiling.

In the hall there is a university shield showing an academic catedra with the arms of Castilla y León. In one of its rooms you can see the so-called Heaven of Salamanca. 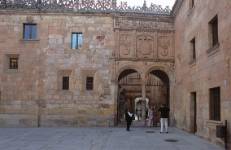 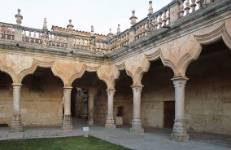