Late Gothic church, with three naves covered with groin vaults. The magnificent main altarpiece dates from the 16th century and was made in accordance with the basic lines of Castilian imagery. In 1851 the church lost its Colegiata (Collegiate Church) status it had been granted by Pope Sixto IV. However, locals continue to regard the church as a Colegiata.

Construction started in 1502 and the works went on for more than 100 years. Juan and Rodrigo Gil de Hontañón and Justo and Blas Gutiérrez were among those who participated in its construction. Particularly noteworthy are the Balcón del Pópulo and its tower, the 18th-century front and the grandiose Plateresque altarpiece. 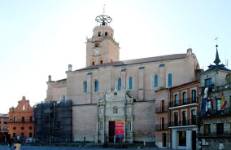