Located on the slopes of the hill that crowns the old Castle of Aguilar, this current chapel was during the Middle Age one of the three parishes that the villa had

The building with three naves with a tower attached to the South side of the headboard, the only piece that is not Roman, because the original apse, of semicircular floor, was substituted in the XVII or XVIII century the current one which is square. Inside, there are remarkable vegetable and historiated capitals, among which 'The massacre of the innocents', one of the most beautiful parts of the North Romanesque, highlights

High resolution image. This link will open using lightbox, there may be a context switch
Iglesia / Ermita de Santa Cecilia 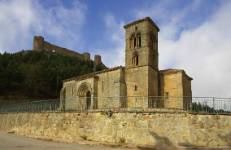