It was built in Gothic style in the XVI century, replacing the old Romanesque temple from the XIII century. It has a fairly long nave. The western façade is Gothic, very rich, with a good tympanum with the Anunciacion. To its side, the tower, decorated with Gothic pinnacles, gargoyles and cresting, rises.

Inside you can see a plateresque altarpiece, by Imberto and Pedro Rodriguez, with panel paintings of Alonso and Pedro de Herrera. It consists of three bodies with reliefs of the life of the Virgin and Jesus. The mausoleum of Cardinal Diego de Espinosa Arevalo y Sedeno, Bishop of Sigüenza, and general inquisitor, who was born in this village is located in the chapel of the cardinal himself had founded and funded. It is made of marble and alabaster, and its author is Pompeo Leoni. 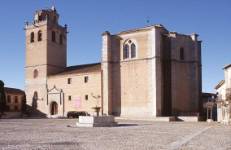