12th century. The central arch is lower than the others, and rests on jambs. Tradition has it that the Infantes de Lara (Princes of Lara) crossed all of the 7 arches.

The decoration of the arches is as follows: five of them have vegetal decoration, two have sirens or sea monsters, and one contains knights fighting these monsters. Like in other Soria Romanesque structures, there is no typically Romanesque decoration and the church has only one nave and a colonnaded gallery. That has led experts to believe that during the 12th century these lands might have been repopulated by people coming from the river Duero region. 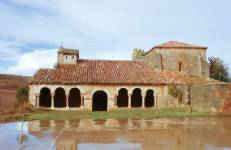 High resolution image. This link will open using lightbox, there may be a context switch
Iglesia de Omeñaca 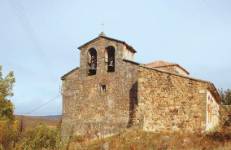