The church is all that remains of the old Mozarabic monastery. It was heavily and inadequately reformed in the 18th century. It is one of the most representative examples of the Spanish Mozarabic art.

The present structure is due to a reform prior to the Gregorian liturgy: there is a pervasive Mozarabic influence, typically Spanish until it was replaced by Roman elements in the 12th century. Its three naves are separated by caliphal horseshoe arches resting on columns with magnificent capitals derived from the Corinthian style. 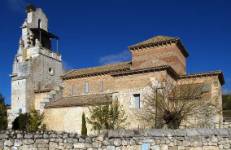 High resolution image. This link will open using lightbox, there may be a context switch
Iglesia de San Cipriano