A tour along outside offers us the typical image of a sober Romanesque building, with its semicircular headboard and a nave with a small belfry at the foot, but as soon as the small portico of XVI century is crossed a surprising façade, in perfect condition and beautifully decorated with vegetable capitals, fantastic beasts and warriors fighting against dragons, centaurs against lions, or the biblical scene of Las Tres Marías in front of the grave, appears

Inside, the sobriety is equally essential, with the apse vault presided over by the remains of wall paintings dated around 1500 and attributed to the master of San Felices, and which unfortunately were forcibly removed and sold in the 1920's 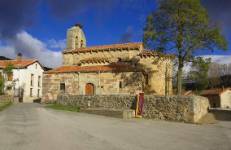