Gothic church built in the 12th and 13th centuries. It contains an interesting main altarpiece by Francisco Giralde, dating from the late 16th century. Also worth a look are the oil board paintings by Sánchez Coello as well as the curtain which, during Lens, covers the church altarpiece, a masterpiece by Coello also.

There are also sculpted images by Giralte, Juan de Avalos and the Italian School of the 16th century, plus an organ by Echeverría, with a monumental carved pinewood Baroque box. There is also a canvas representing Nuestra Señora del Risco, the patron saint of Villatoro (Ávila), which was recently found in this church. It had been lost during the sale of the Church properties. 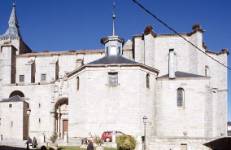 High resolution image. This link will open using lightbox, there may be a context switch
Iglesia de San Eutropio 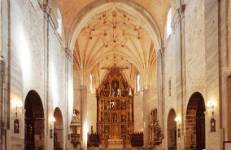