Declared an Asset of Cultural Interest with the category of Monument in December 2020. The church of San Juan in Villalón de Campos is a construction of modest appearance, from the second half of the 15th century, in Gothic style, built mostly with traditional and characteristic materials of the geographical area of ¿¿Tierra de Campos: Wood, mud and brick. Located on Rúa street, one of the main streets of Villalón known in other times as Constitución street or San Juan street, the Church that was almost on the western edge of the consolidated and isolated town of the village, today has been fully integrated into the urban nucleus, at the bottom of a large triangular square, in an environment of heritage interest, along with interesting examples of popular architecture, adobe and brick constructions sometimes with arcades that support wooden or stone uprights, among which the old hospital.

Externally, the Church has a cubic volume with little or no difference in height between the naves, following the typology of the Churches with three naves with a chapel at the head, a square floor and a tower at the foot. The tower at the foot disappeared at the end of the 19th century and was replaced by the current belfry. On the outside, the southern portal that gave access to the nave stands out, currently unused and hidden by the portico; It has a bent and slightly tumbled horseshoe arch, flanked by two rectangular brick pilasters. At the foot of the temple the doorway built in brick opens, with a large semicircular arch that ends in a large belfry with two sections. On the façade on the Gospel side, the body of the sacristy stands out, topped by a brick cornice made up of small arches; on the Epistle side there is a portico formed by semicircular arches resting on square pillars. Inside, the church has a more Renaissance aesthetic, with a "hall plan", with three elongated naves of irregular width, the central one double-width, separated by two rows of columns formed by slender octagonal pillars, six on each side. At the head, a pointed arch separates the central nave from the presbytery, with a square plan, to which the sacristy and another series of non-integrated constructions are attached. At the foot is the choir that houses an organ. The beautiful cupuliform coffered ceiling that covers the presbytery stands out. It is an interesting polychrome coffered armor, with an octagonal base and stars of twelve and nine on each cloth, with flowers in the center of the ties. 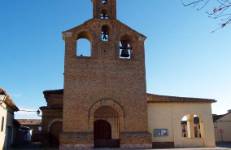