11th-century mixed Romanesque structure, with a single nave and a square apse. It has a square tower, built with masonry except the corners and the bell structure, which are made of stone blocks and the facades are decorated with geometric motifs.

The church was closed in 1843, and its archive and sculptures were moved to the Iglesia de Santa María. After several sales of Church lands it was used as a barn and as a farm warehouse. In 1958 a thunderbolt struck the northern side of the tower and destroyed most of the roof. It has been restored by the Town hall, the owner of the church since 1993, in order to house the Aula Arqueológica de la Villa de Santa Lucía. 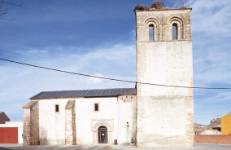