Made of stone blocks, with three naves covered by starred rib vaults. The main chapel is very large and has ten sides.The tower has five stone storeys and the front on the side of the Epistle is Plateresque.

The coffering of the 15th century is Mudejar with paintings. The main altarpiece, of the 16th century, was built by Manuel Álvarez and Mateo Lacrín. There is also a Renaissance altarpiece with small paintings, and sculptures of Saint Andrew and Saint John the Baptist, and there is a Baroque organ, a Plateresque pulpit and choir stalls of the 18th century. 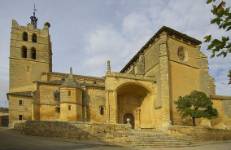 High resolution image. This link will open using lightbox, there may be a context switch
Iglesia de San Juan Bautista