Despite the name of the village, they are two slender towers that rise over the modest hamlet of Rebolledo, the medieval castle which belonged to the Lasso de la Vega, and the Renaissance tower of the Church.

The temple, as an inscription tells, was repopulated in the year 1186, when also the stonemason Juan de Piasca built the famous portico in which the cited epigraph is located. Of the Romanesque church, together to this portico, barely have survived a few remnants, including its roof, of a composition and sculpture that has nothing to do with the arcades that preceded it, which without a doubt are among the most highlighted of the Romanesque sculpture of Castilla y León 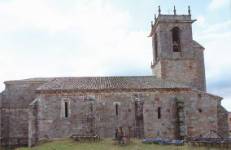 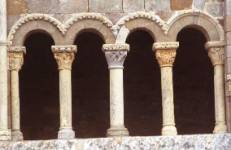