Its Romanesque portal, of great historical value, receives the visitor opening the doors of a building which is endowed with late Gothic elements. It has three naves separated by large arches and the central nave is topped with a chevet of baroque times where is the altarpiece with the image of San Lorenzo, patron of Navafria.

It has a solid square tower, opened with double openings, topped by semicircular arches. From the temple, every year on August 10th, goes in procession San Lorenzo. 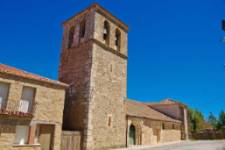