Built in the mid 12th century, it combines the following styles: Cistercian (general structure), Catalan Lombard (external decoration of the apse and the dome turret), and Mudejar (the dome and the sculpture decoration).The main façade was concealed by a two-storey gallery added in the 17th century, of which only the atrium remains.

The capitals have repeated forms: monsters, fabulous animals, grotesque men, and peculiar vegetal forms with leaves and pinecones. There are eight round paired arches resting on capital-like corbels. The whole of the dome is made of stone, with a geometrical drawing, and the arches do not converge in the centre. It is similar to some of the domes in the Mosque of Córdoba. 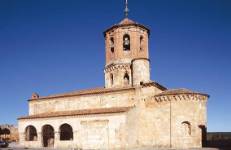