Declared an Asset of Cultural Interest with the category of Monument in December 2020. The church of San Miguel is located in the main square of Villalón, forming a set of great monumental interest in which the famous scroll stands out.

It is one of the most interesting Mudejar Gothic temples in the province. Its origin dates back to the 13th and 14th centuries, although its current image is the result of various construction phases that go from the beginning of the 13th to the 19th century.

Access to the church is from the square, by means of a staircase through a portico of Tuscan columns from the neoclassical period, and by a side portal from the end of the 15th century with a semicircular arch, decorated with balls and scales.

The transept is covered with a half-orange dome supported on simple pilasters and crowned by a slender octagonal body lantern closed by a cupola of gallons.

The chevet stands out for the semicircular apse with very simple neoclassical lines, externally divided into two sections by a powerful cornice.

Outside, the great Gothic tower with four sections stands out, the first three made with stonework and the last, the brick bells. Inside, to the primitive Mudejar brick construction with three naves, a fourth nave was added to the side of the Epistle in the 16th century. The splendid Mudejar coffered ceiling that covers one of the chapels on this side dates from this same century. The naves are separated by thick octagonal pillars that support large bent pointed arches that, finished in bishops, house pointed horseshoe arches, influenced by the Toledo and Andalusian Mudejar style. The main nave is covered with barrel vaults with lunettes and baroque plasterwork, while the sides and arms of the transept are covered with ribbed vaults. The vaults that cover the main nave date from 1,777 and were executed by Manuel Fernández Cabezas, and the construction of the oval dome of its transept and the neoclassical apse would correspond to the same dates. At the foot the choir rises on a lowered arch that covers a curious gallery, the baptistery, made up of very pointed arches supported on corbels, all made of stone. 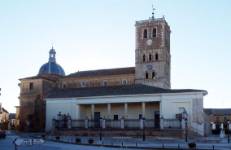