It is a construction of the XIII century with later remarkable annexes, as the chevet of the XVI century and the baroque façade of the XVIII. The church has three naves, being the central very slender. It has a Mudejar pulpit from late Gothic. From late Romanesque period retains only the baptismal font and a column with a capital decorated with balls, which is attached to a pillar on the southern side of the transept. The baptismal font, from the hermitage of San Andres, is located in an area adjacent to the right nave. It consists of a flat base, a hemispherical cup with a vegetal border and a number of figures on the bottom half. It can be dated to the late XII or early XIII century.

Most notable of the art preserved in the temple is the altarpiece, great early Romanesque ensemble executed by Domingo de Amberes in the years 1566-1577, gilt and polychrome by the painter Juan de Cea. The church is a veritable museum of the altarpiece, since there are up to ten works of this genre from different periods. It should be noted, among others, the plateresque altarpiece of San Juan, built by command of the Quintanadueñas family, the Renaissance altarpieces of Santiago and San Martin and the interesting baroque altarpieces located in the columns of the transept. 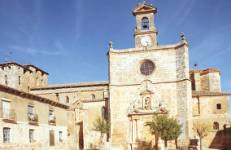 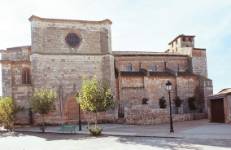