The church of San Miguel Arcángel was rebuilt in 1516 on a previous church, possibly in the Romanesque or Mudejar style from the 12th century, in order to make it more spacious and encompass the six parishes that already existed in Grajal in the 13th century. It consists of three naves separated by large Tuscan columns, a hall plan, mixing elements of the late Gothic and Renaissance styles, with Baroque vaults. It is built in different stages. Thus, the flared of the portal is the oldest part of the church, Romanesque, and can date back to the s. XII. And the tower, at the foot of the church, is of the Moorish type, made of brick like the whole church, and 40 meters high. It has the peculiarity of having an angled corner. The main chapel is from the s. XVI, late Gothic style, heavily influenced by the Renaissance seal. The transept, the central nave and the lateral ones are made up of baroque vaults with different geometric drawings on plaster, all of this being covered from the 17th century.

Roque Muñoz Main Altarpiece, from the year 1600, made of wood, the golden color predominates. Composed of the bank, two bodies and an attic or crown and in turn divided into three vertical streets separated by fluted columns with Corinthian capitals. In the center, the carving of San Miguel Arcángel, patron of Grajal and who gives the church its name, surrounded by a large number of images with an important meaning for the town. Without forgetting the rest of other valuable altarpieces, such as that of San Sebastián and the Cristo de la Agonía.

The church of Grajal has two peculiar elements that make it unique and different from all the others:

-The lattice window located on one side of the main chapel: It corresponds to the oratory or stately tribune of the palace, from where the nobles heard the mass or saw the liturgical services without mixing with the people (palace and church are united).

-the two cabinets with bars located on both sides of the presbytery: here are kept the relics that were donated by the Vega family of the palace in 1546 and that would be exhibited on different liturgical dates and that currently can only be seen on day 2 February, the holiday of Las Candelas. There is a document in the archive of the Ducal House of Alburquerque that speaks of 180 relics. Today there are more. It is the second most important collection of relics in the province after those of San Isidoro in León.

High resolution image. This link will open using lightbox, there may be a context switch
Iglesia San Miguel 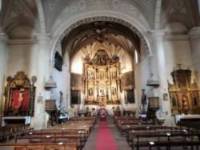 High resolution image. This link will open using lightbox, there may be a context switch
retablo mayor

High resolution image. This link will open using lightbox, there may be a context switch
Grajal de Campos 02

High resolution image. This link will open using lightbox, there may be a context switch
Grajal de Campos 01

High resolution image. This link will open using lightbox, there may be a context switch
Grajal de Campos 03