The temple was initially on the banks of the Esla River, and the construction of the Ricobayo reservoir threatened to flood it. The historian Manuel Gómez Moreno managed to dismantle it from its original location and transfer it stone by stone between the years 1930 and 1932 to the closest population to its original location: El Campillo, where it currently stands. It is a National monument since 1912.

Both for the design of its structure and for the integration between a perfect study of volumes, interiors and exteriors, and an exceptional sculptural decoration for the time, and for the magnificent state in which it is located, it is the most interesting monument that has come down to us from the Visigothic period and one of the best in early medieval Spanish art.

It has a plan that is a combination of the Greek cross (eastern half) and basilical (western half) with great compartmentalization of spaces, as was required in the ancient Hispanic liturgy that required a space for the priest, another for the rest of the ecclesiastics and a third for the laity. The anthropomorphic symbols of the evangelists stand out at the base of the columns and the story capitals' Daniel in the lions' den 'and' Isaac's sacrifice '. Inside there is a monolithic tomb, supposedly medieval, and a baptismal font from the 16th century. 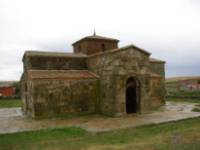