Of the Romanesque origin of this church there is only the north wall, from the 12th century, in which a double archivolt doorway opens, one of them decorated with rosettes inscribed in pearl circles, similar to that of the church in Almenara.

It was renovated in the late fifteenth or early sixteenth century as evidenced by the arches of the naves and the south portal, one of the jewels of the provincial Spanish-Flemish Gothic.

Also from this period are the pair and knuckle wooden deck and the tower attached to the foot.

Later in the 16th century the headboard was reformed, in whose decoration we see new Plateresque airs.

The most important feature is the 16th-century lateral altarpieces, which contain valuable images such as Santa Teresa. Most of the paintings and sculptures surround the bass-relief of the Emperor on horseback worshipping the cross under a decorated canopy.

High resolution image. This link will open using lightbox, there may be a context switch
Iglesia de la Santa Cruz 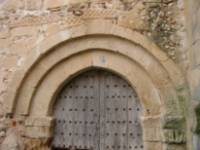 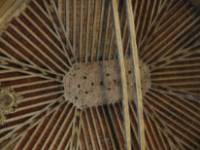 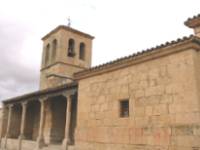 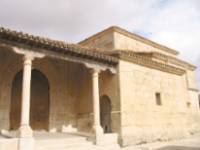 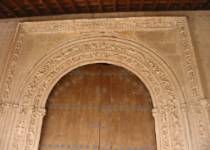