It is the parochial church and the centre of Wamba's history. The far end is Mozarabic or, to be exact, Visigoth and the rest of the church is Romanesque.

The three naves resting on pillars with attached columns were built in the 12th century. There is a Spanish-Flemish funeral niche and an altarpiece with paintings of the 16th century. The wall preserves rests of fresco paintings and two of the chapels, the Capilla de Doña Urraca and the Capilla del Osario, are made of craniums and bones. 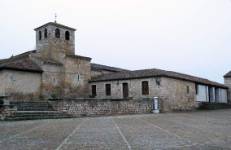