The church was started in the second half of the 15th century, late Burgos Gothic style. It has three naves and a transept. Two coats of arms of the Catholic monarchs and the Aranda family.

The south front was conceived as a large open-air altarpiece. It has been attributed to Simón de Colonia. It contains scenes such as the Nativity, the Passion and Resurrection of Christ, as well as sculpted doors, a line of sharp pinnacles and the pulpit by Miguel de Espinosa and Juan de Cambray.

High resolution image. This link will open using lightbox, there may be a context switch
Iglesia de Santa María 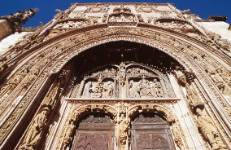